Our second largest turnout with 107 registrants for the 8th annual Holiday Hustle, and a crisp sunny day this time! Huge thanks to all participants, volunteers and sponsors.

A 50% jump in attendance over previous years! We had an amazing 156 registrants for the seventh annual Holiday Hustle. Huge thanks to everyone who attended. It was rainy, cold and windy but that didn't stop everyone from having a good time.

Thank you to everyone who came out to participate or volunteer! Registration total was 86, despite a rainy day.

Thank you to everyone who came out to participate or volunteer! The weather was a bit warmer (and wetter) than forecast but overall very good conditions. Registration total was 91, a great turnout.

Thank you to everyone who came out to participate or volunteer! The howling wind and downpour of Saturday calmed down nicely and we only had a bit of misty rain to contend with, followed by a bit of sunshine during the post-race festivities.

Thank you to everyone who helped make the 3rd annual Holiday Hustle a success!

A record turnout of 99 registrants and a mild sunny December 14th morning made this year's edition the best Hustle yet. Many Santa hats and a variety of other colourful Christmas costumes contributed to the festive atmosphere. 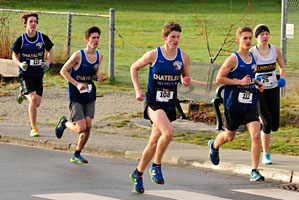 The 5k was won by UVIC student and recent Chatelech grad Jordan Wilson, followed by Vancouver's Andrew Tuovinen in the 50+ category, and Gibsons' Kimberley Doerksen, who was sporting her old Elphinstone team singlet. The men had to work hard to avoid being "chicked" by Doerksen, who is one of Canada's top marathoners and the women's record holder at the Fool's Run. The Chatelech Racing Team was well represented, with Alex Nightingale of Halfmoon Bay taking third place for the men in a new personal best time, followed closely by teammates Joshua Desrochers and Elliot Wadge of Sechelt. Another Chat Team member Goldney Hourigan of Sechelt took second place for the women, with Vancouver's Carolyn Townend rounding out the podium positions.

A small but enthusiastic group of dance-walkers made their way around the 2k course in just 23 minutes, while many families walked and ran together. Inside the Seaside Centre, everyone enjoyed Christmas goodies and live music by Arbutus Sounds Chorus. Many locally donated draw prizes were given away, as well as the grand prize of a $150 voucher for head-to-toe running apparel, from Impact Magazine.

The fundraising portion of the event was also very successful. Two bins of toys and food, plus $240 in cash donations, were collected and delivered to the Elves Club. Net proceeds and additional donations, including $500 from Telus, totalled nearly $1500, which was split between the Chatelech Running Team and the Chatelech Grad 2015 Fund.

Thanks to everyone who came out to run, walk, dance-walk, volunteer, and sponsor the Holiday Hustle! A special shout-out to Telus for donating $250 to the Chat Band and $250 to the Elves Club!

The lucky winner of the Grand draw prize (One-Night Stay and Spa Garden Pass for two people at Painted Boat) was Gordon Flett of Vancouver (also our 3rd finisher overall in the 5k)!

Thanks to everyone who participated in the first annual Holiday Hustle 5k & 2k! Your participation and generous donations raised $1300 for the band trip, and 2½ large boxes of food & toys plus $195 for the Elves Club! And you all looked great in your festive hats and attire!

Kudos to our volunteers

Many many thanks to our awesome volunteers from the Chat band (students and parents), the Halfmoon Bay Volunteer Fire Department, and the April Fool's Run volunteer list. Despite the cold rainy morning everyone showed up on time and did a terrific job. The selection of post-run goodies from the band students and parents was amazing, and the jazz band sounded great!

Grand Draw Prize from The Spa at Painted Boat

Sue Joly from Gibsons was our lucky winner of a $200 Gift Certificate from The Spa at Painted Boat!